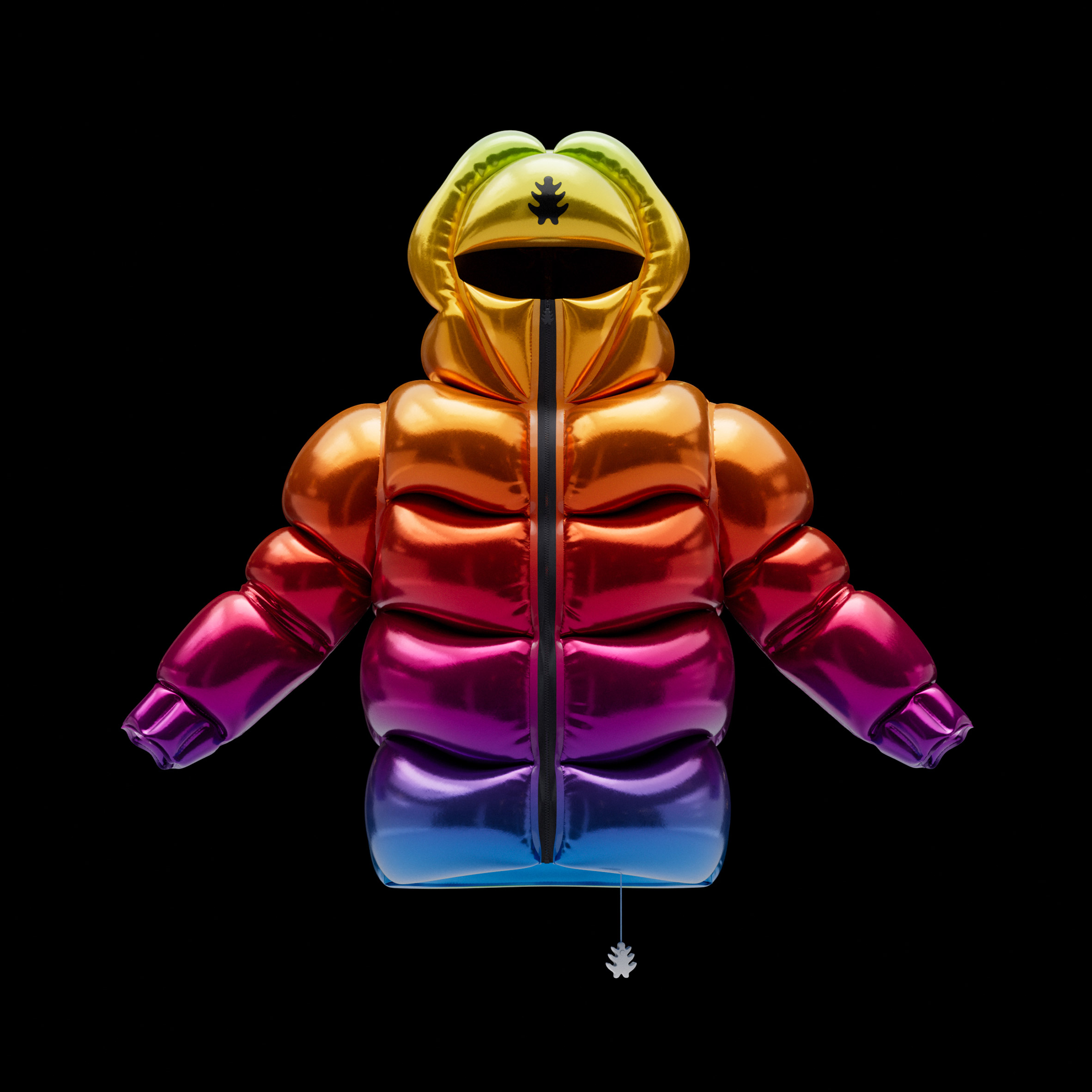 Italian designer Andrew Kostman has created a metallic inflatable puffer jacket that is filled with helium instead of down and can be carried around like a balloon.

Called Helium-10000, the coat is inflated by the wearer using a valve near the hem and an accompanying canister of the lighter-than-air gas.

Although the buoyant garment does not lift the wearer off the ground, it can float on its own and be carried around like a balloon using a long dangling tag.

At home, it doubles up as an art piece and can be left to float on the ceiling in lieu of being hung on a coat rack.

"There is no benefit to it being able to fly," Kostman told Dezeen.

"It is more an artefact designed to amaze and make people realise that more can be done if we overcome our traditional thinking and approach things from a different angle."

The jacket is made in Japan and available in six metallic colourways, from an iridescent rainbow gradient to a deep black called Vanta.

Its plump blow-up volumes are rendered in an undisclosed synthetic sheeting material that Kostman said is lightweight and yet durable enough to withstand wear and tear.

"The jacket can't have any coating or lining in order to make it float but the material is smooth and pleasant to the touch," Kostman explained. "It feels like being wrapped in cotton candy."

A branded helium canister is included with each jacket, allowing it to be refilled twice. Each charge keeps the Helium-10000 afloat for up to two weeks.

"Our technician is looking for the best solution to have more charges within the helium cylinder without compromising too much on its design," the designer explained.

"It's more complicated than I expected to tell you the truth."

Another key hurdle that had to be overcome was fusing the various different panels that make up the jacket in a way that is secure while still allowing them to be inflated.

"No one wanted to take part in this project initially, discouraging me that it was impossible and that there were no technologies to weld inflatable volumes of this size," Kostman said.

"The problem was to make the seams resistant enough for the jacket to be wearable. So the best option was to make them double-stitched, as an oval-shaped seam elongated and squeezed," he continued.

"You don't have to fill each volume independently since I've designed them to be interconnected with space in between the seams for helium to flow."

A number of other fashion designers have experimented with inflatable garments and the overblown, exaggerated proportions they create.

Among them is Fredrik Tjærandsen, who enveloped models in giant rubber balloons for his Central Saint Martins graduate show, and Harikrishnan whose blow-up latex trousers went viral online after being featured on Dezeen.

The post Helium-10000 is an inflatable puffer coat that floats like a balloon appeared first on Dezeen.

We try making a low-calorie katsu with tofu instead of pork【SoraKitchen】
Aug 07, 2022

Get Organized: 25 Home Storage Hacks That Will Instantly Declutter Your Space
Aug 07, 2022