These red velvet cinnamon rolls are inspired by red velvet cake! It has a touch of cocoa in the dough and is frosted with a tangy cream cheese frosting.

Just when I thought winter was over here in San Francisco, we get an insane cold spell (well, cold for San Francisco) and I start pulling out the heavy sweaters again. And with the cold weather, I start thinking of baking projects that will warm up my kitchen. Deep dives into my blog archive makes me think that maybe its time I make my blood orange and coconut velvet cake which is a riff on red velvet cake. Which lead me to my red velvet smores which are a fun project. Then, after having an unsatisfying cinnamon bun at a coffee shop (it was doughy and underbaked) I realized I had wish I had some of my eggnog cinnamon rolls but I no longer had any eggnog in my fridge! But I still needed to rectify that poor cinnamon roll experience immediatelyso I made red velvet cinnamon buns. Clearly I had red velvet on my mind!

What exactly is red velvet?

There have been articles upon articles about the history of red velvet cake. Red velvet is a layer cake that has a soft tight crumb, almost like velvet and frosted with cream cheese or ermine frosting. Red velvet cake is a cake with a touch of cocoa in it and traditionally was made without dye, allowing the natural red color of the cocoa to shine through. Modern red velvet cake uses red dye to up the red factor.

Ive taken inspiration from that traditional red velvet cake and turned the flavors of a mildly chocolate cake into a cinnamon bun, sticking with a common tangy cream cheese frosting for the rolls.

How do you make red velvet cinnamon buns?

Like regular cinnamon buns, you make an enriched dough, which is just a fancy term for bread dough that has eggs, butter and milk in it. To make it red velvet, you add 1/2 cup of unsweetened cocoa powder and a tablespoon of red food coloring.

Once the dough is made and risen you roll out it out, spread the cinnamon filling over it, then cut the dough into 12 individual disks, let it rise again, and then bake.

Once baked, you frost it a cream cheese frosting and you have red velvet cinnamon rolls!

What makes this recipe different from other red velvet cinnamon rolls recipes out there?

The majority of red velvet cinnamon roll recipes Ive found use a pre-made cake mix as the base for their dough. Though I have nothing against cake mixes, I prefer to make most of my recipes from scratch.

This recipe is similar to a yeasted cinnamon roll recipe but with the addition of red food coloring and some cocoa powder. But the flavor is much more true to a red velvet cake made from scratch than any cake mix version.

Yes! Making cinnamon rolls (any form of yeasted cinnamon rolls) seems time consuming, but you can totally break down the recipe into chunks of preparation, letting the dough sit overnight in the fridge.

On the first day, make the dough and instead of letting it rise until double, just cover it in the bowl and let it sit in the fridge overnight. Then take it out the next day, bring it room temperature (about 2 to 3 hours depending on the temperature of your kitchen) and then proceed with the recipe.

On the second day, once the dough has risen and doubled in size, roll it out and slice the individual disks and place them in the baking pan and then cover and refrigerate the entire pan.

On the third day, bring the pan back to room temperature (again, 2 to 3 hours) and then bake them off.

You can, of course, combine any of these steps together, letting the dough rise and then rolling it out and refrigerating it for an overnight recipe.

Let the dough rise in the fridge actually improves the texture and flavor of the dough as well, so its a win-win situation!

How do I make the cinnamon roll dough rise faster?

Because of the food coloring and the cocoa powder in the dough, these cinnamon rolls do rise a little slower than regular cinnamon rolls. If you want to speed up the rise time, you need to place the rolls in an environment that will help the yeast grow!

To do that you need a warm environment. Here are few suggestions to help create the optimum environment to help the dough rise:

How do I make the frosting for cinnamon rolls?

I spreading half the frosting over the hot cinnamon rolls right out of the oven so the rolls get a melty glaze that pools into the crevices of the roll. This ensures the rolls stay moist completely. Once cooled, I spread the remaining frosting over it.

What if my frosting is lumpy? Is there a way to get rid of the lumps in cream cheese frosting?

Weve all been there! You didnt let the cream cheese or butter warm up and all of sudden you have lumpy frosting. Ugh!

No matter how much you cream or beat your frosting, if its lumpy, it will stay lumpy. But there is a solution. Place a large rimmed baking sheet in your freezer for 15 to 20 minutes or until it is cold to the touch. Meanwhile microwave the frosting in a microwave safe bowl in 10 to 15 second increments, stirring until the frosting is completely smooth and the lumps are gone. At this point the frosting will be warm and liquidy.

Once the rimmed baking sheet is cold, place a piece of aluminum foil over it. Pour the frosting glaze over the foil and spread it out with a spatula, moving it back and forth to cool it. As the frosting cools from the cold metal, it will form up. Scrap it up off of the baking sheet once its at the right consistency and firmness for you. You have smooth cream cheese frosting!

If you have time you can skip the baking sheet in the freezer and just place the bowl of warm frosting in the refrigerator to cool it down and firm it up. But this will take an hour or two at the minimum. The cold baking sheet trick does this much faster.

Or, if the above sounds like too much trouble, just spread the frosting over the cinnamon rolls as is. It will be delicious. They just might not look Pinterest Perfect but no one will care once they taste them!

How do you store red velvet cinnamon rolls?

The best way to eat them is to eat them the day you bake them! But you can store them at room temperature on your counter, in an airtight container or under tight plastic wrap for up to 48 hours. Keep in mind the longer you keep them around, the less fresh they taste.

You can also extend the lifespan of cinnamon rolls by refrigerating them. They should last up to a week in the refrigerator, again stored in an airtight container or under tight plastic wrap.

Yes you can! Make sure the rolls are completely cooled to room temperature and then freeze them either in the pan or separate them apart, freeze them on a baking sheet until frozen (about 2 hours) and then store them in a large resealable freezer Ziploc bag. They can be frozen with or without the frosting, though keep in mind the frosting will be a little more sticky and gooey once thawed due to condensation.

Defrost the rolls on the counter, for about an hour or try microwaving one roll at 50% power for 45 to 60 seconds. Keep in mind that when you thaw the in the microwave, the frosting will get pretty melty.

Can I freeze unbaked rolls?

Why yes, you can! If youre the sort of person that plans stuff out in advance (not me) and has extra space in the freezer (definitely not me) you can TOTALLY make these rolls and then freeze them. Just follow the instructions all the way through to the rolling and cutting of the dough. Place them in the prepared pan, then cover it with plastic wrap tightly, and then with foil. If your pan has a lid, use that instead. Then freeze the entire thing!

To bake, just thaw the rolls overnight in the freezer and then let it come to room temperature the next day. Let it rise until the rolls are touching each other and the bake as directed!

Do I need to use artificial food coloring?

There are recipes out there that create red velvet cake and other red velvet baked goods using beets as the coloring. Beets, unfortunately wont work with this recipe. This recipe is specifically designed to use food coloring, as the grated beets not only will affect the flavor of this dough but will also lead to a heavy dough that wont rise properly.

The natural red food coloring dyes that I have tried all bake out and turn brown when heated in the oven. They seem to only work for non-baked items like frosting. So sadly the only way I have found to create the red color in this recipe is to use artificial red food coloring. If you find another option, please leave a comment! Id love to learn about it. 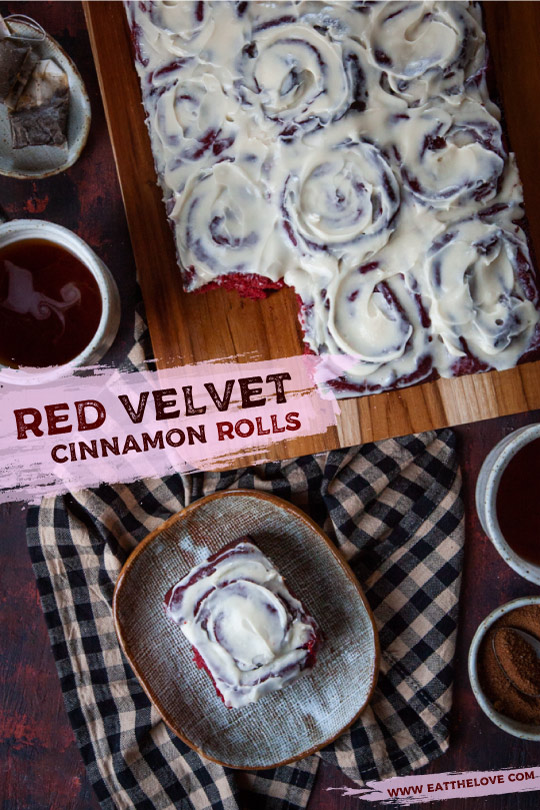 These cinnamon rolls have the flavor of traditional red velvet cake with the addition of a little bit of cocoa and the classic cream cheese frosting. You can break the process up or make them overnight rolls by just refrigerating the dough after you make it or refrigerate the unbaked rolls after cutting them up. More detailed instructions for this can be found in my section above. Feel free to increase the amount of food coloring if you want your rolls to be more vividly red, or reduce/eliminate the food coloring if you are averse to artificial dyes.
Course Breakfast, brunch, Dessert, Snack
Cuisine American
Keyword cinnamon rolls, cream cheese frosting, red velvet
Prep Time 30 minutes
Cook Time 28 minutes
Rise Time 3 hours
Servings 12
Calories 515kcal
Author Irvin