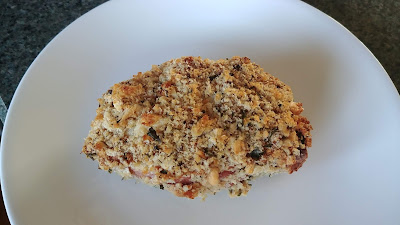 Since I received a couple new cookbooks for holiday gifts, I've been spending a lot of time in January reading cookbooks, re-reading cookbooks, and making a master spreadsheet of all the recipes we want to try/were ripped out of magazines/are in cookbooks. It's nerdy, I know. A spreadsheet with many tabs, the recipe name, source/location, notes if we've made it, notes if it calls for ingredients we don't usually have on hand, etc. One recipe I came across again, one that's been on the try list for a long time, is this one: Crunchy Pork Chops with Asiago & Prosciutto. It's in The Science of Good Cooking. We finally tried it and oh my gosh these were so good! 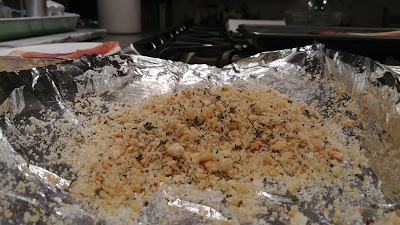 They're a little labor intensive. Brine the chops for up to an hour. Make homemade breadcrumbs (so worth it). 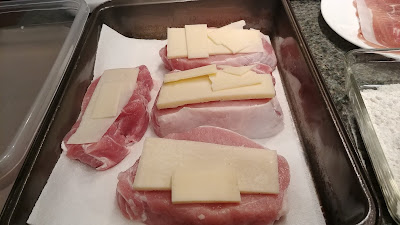 Pat the brined chops dry, top with asiago, wrap in prosciutto. That got a little tricky. The prosciutto kept tearing. 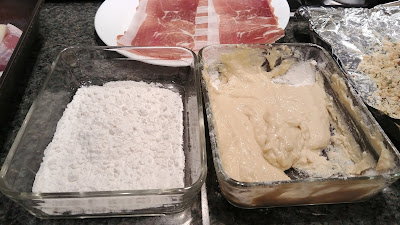 The torn prosciutto made things difficult because you still have to dredge in flour, coat in the batter (egg whites, mustard, flour), and coat the chops in the breadcrumb mixture (bread crumbs, chopped shallot, thyme, parsley, parmesan). The batter is thick. 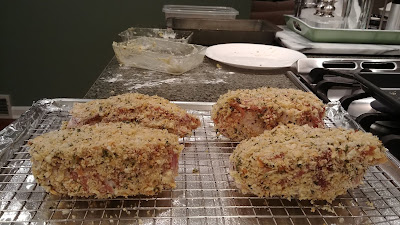 SP persevered and we had four beautiful chops on the rack, ready to bake. 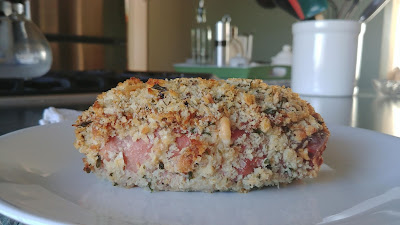 A baked pork chop. Crispy breadcrumbs. You can see the prosciutto on the side. 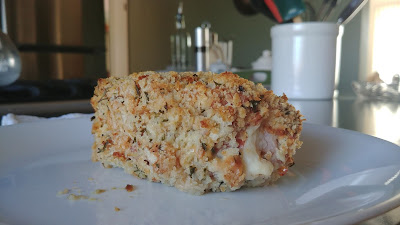 You can see some melted asiago oozing out on the right corner of the chop. 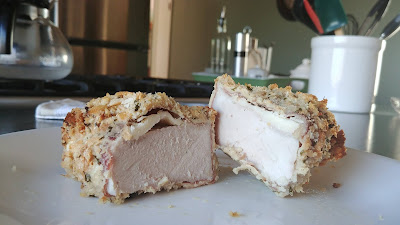 A peek inside. These were juicy chops. Crunchy bread crumbs. I like that the prosciutto was wrapped around the entire chop and not just placed on top because it meant each bite had a wee taste of prosciutto. We both really enjoyed these so they are on the Make Again list.