Before we get into the rummage sale, I received a lovely surprise on Valentine's Day from our son David, a bouquet of tulips that immediately found their way into a large decorative vase. Realisticly it was probably Michelle's idea, but either way it was super sweet. Anyway, here they are looking oh so cheerful! 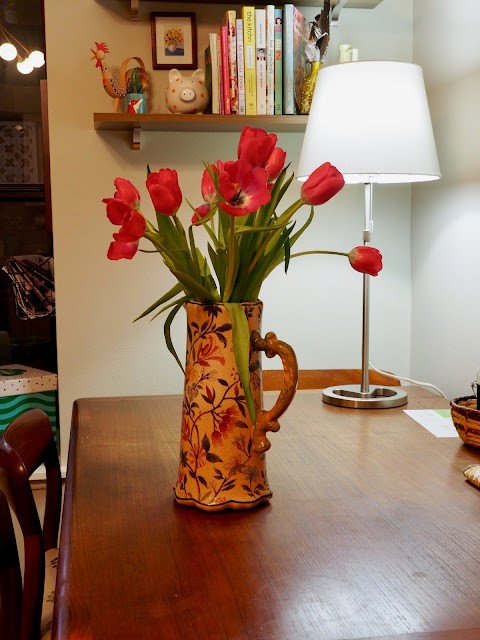 The vase felt a little damp so I placed them on a folded cloth napkin to grace our kitchen table. So far so good, until it was not. Yesterday morning, before I left for rummage sale duty, Bruce noticed the napkin was wet. Oh no! A large square of wet on the teak table!!! They are now in a large plastic glass and today, while I was gone, Bruce refinished the table and it looks like a million bucks! Another lovely surprise...

So, about the sale. Ann, pictured below, asked if I would handle the clothes, warning me that it was a big job. I will give it a go, was my response. 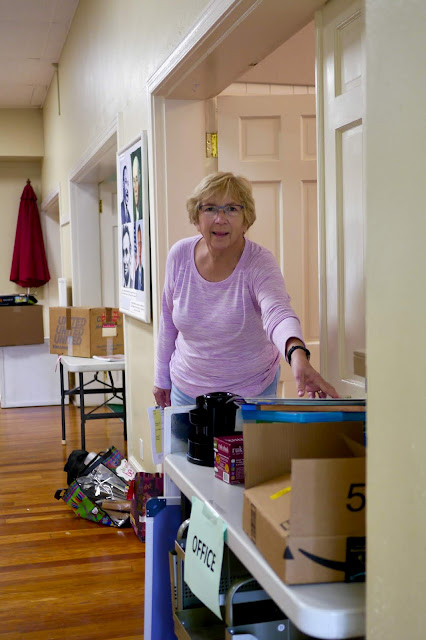 Around 11 on Saturday, Bruce and I arrived to took over the chapel. People began arriving with their donations and the sorting began, one by one. About ten of the racks were obtained by Jackie, our chairman, from the closing Gap store on Park Avenue. Bruce applied felt bumpers on the bottom and we planned a layout. We can do this. 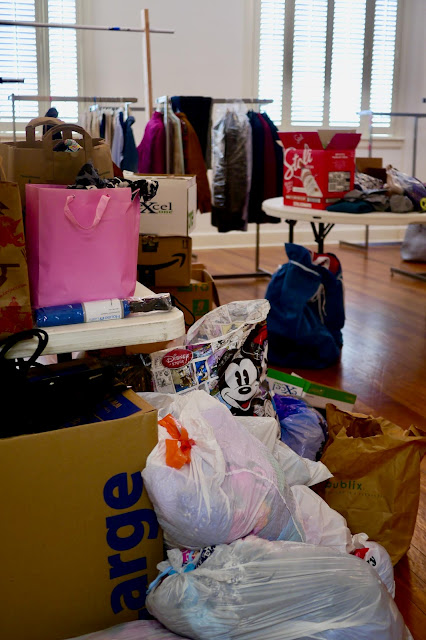 At first it seemed somewhat manageable as we opened them up, hung the clothes, and so on and so forth. After leaving at 4 on Saturday, Ann texted saying a family was donating 25 bags worth of clothes belonging to a woman who passed away last year. Not able to wrap my head around that just yet, I arrived at 8:30 Sunday morning and there they were, hanging wherever space could be found. 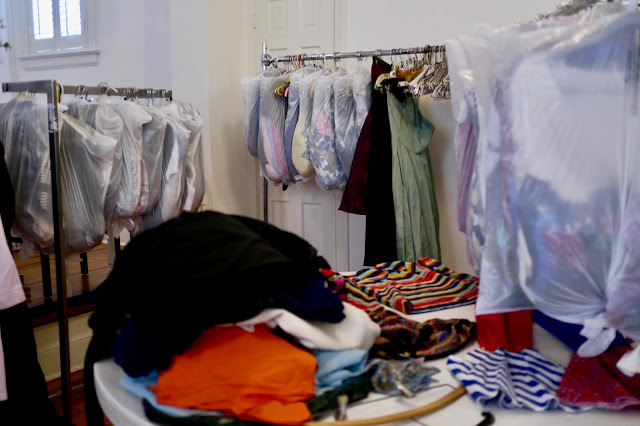 Saturday afternoon it looked like this after Cynthia and I were done for the day. 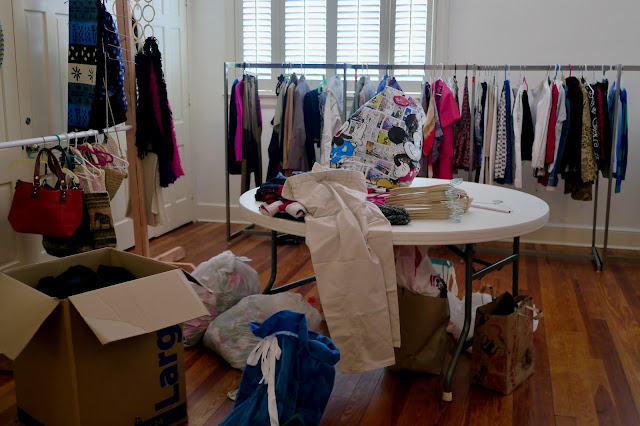 Things were taking shape. Here's one of my favorite outfits we came across. 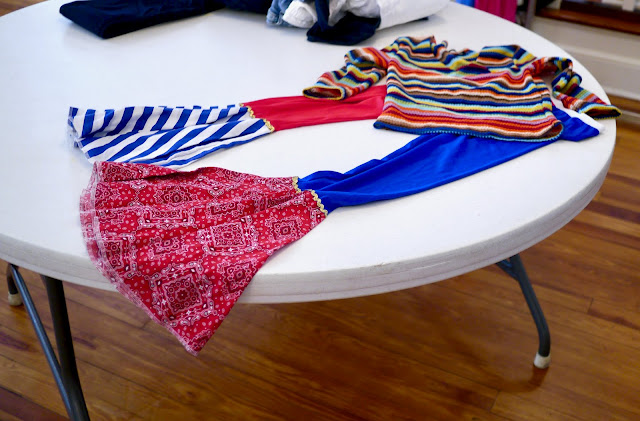 Yup, one leg red, one leg blue! A costume perhaps? We actually do have a costume section that I've mostly been ignoring so far.

Removing those plastic bags, I was heartened that everything was already hung, yet I could not help but wonder how big a closet she had. I counted SIXTY skirts! SIXTY! The good news is that they are mostly all from Talbots, and in prime condition. Should you know anyone who wears a 3X size, let them know that we have three wholeracks of goodies! As well, loads of bras and nightwear. Oh yeah, probably sixty colored knit shirts to wear with those skirts. 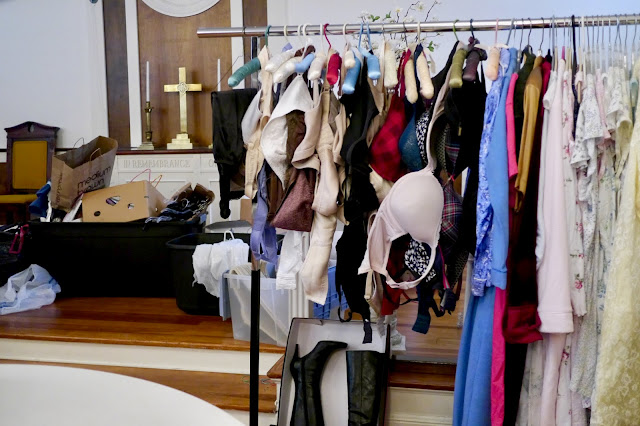 I've been told that in the past, all of the handbags were piled on a table, however, since Ann's husband John had already made this double rack, seemed like a good place to display them. 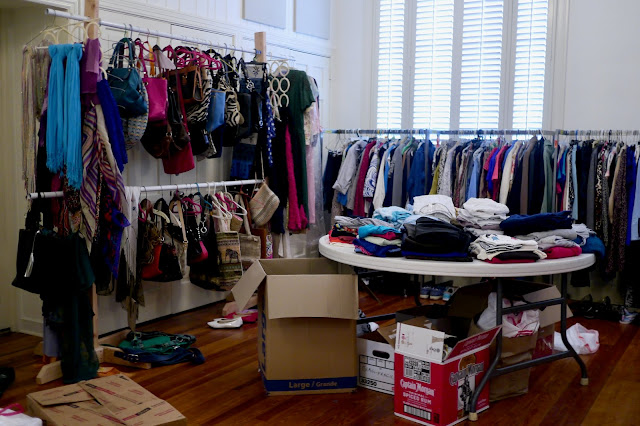 About those bags....good night, every day more and more arrive. I had the good fortune to have another Cynthia for a helper on Monday morning, a most interesting woman and super worker who did not mind folding clothes. 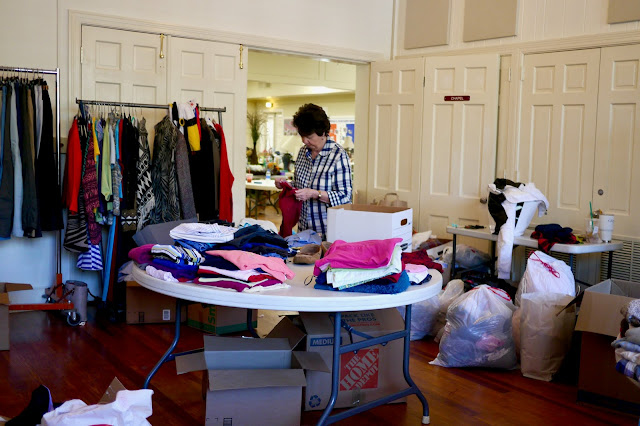 Of all things, in this morning's paper, there she was as the interim director of the Orlando Museum of Art. You know what? She never even mentioned it. As the bags kept arriving, piled one atop another, I began feeling overwhelmed, so moving them all to a spot where they are hidden from sight until such time as they can be opened and find homes was just the ticket. In the afternoon, the other Cynthia and a helper plowed through them with only about ten remaining when I arrived this morning. Except more kept coming today with nowhere to display them. Finally, help arrived in the form of a double rack!!! 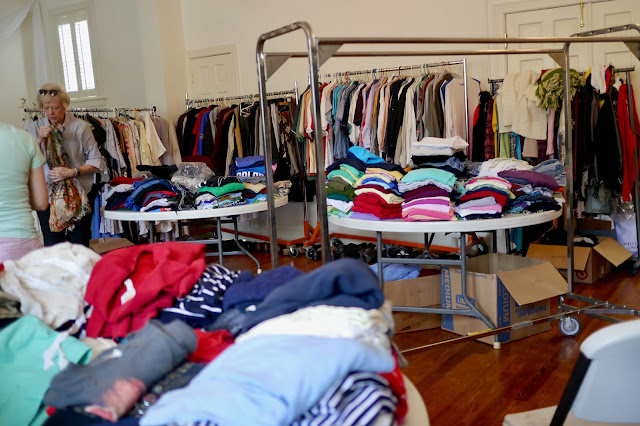 Just as I was fixing to leave the rack came in and we moved the tables, hoping to put it in the middle of the room with items on both sides. Afternoon helpers arrived, opening bags and boxes and sorting items into sizes for when the masses arrive on Friday morning. 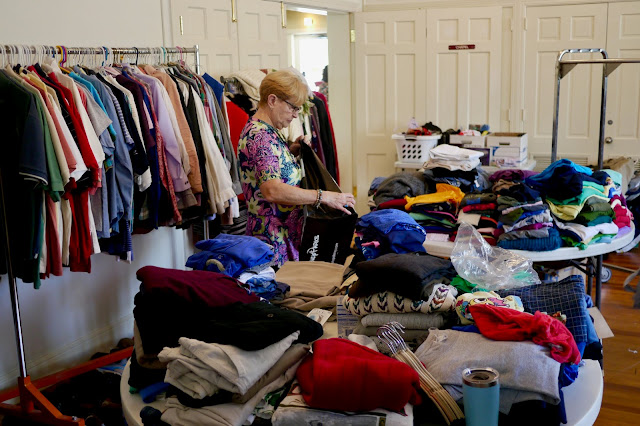 Linda and Debra helped me both yesterday and today, and were they ever amazing, organizing and sorting like nobodies business. I thought I recognized Debra and turns out she was the principal at Conway Middle School when Bill and Dave were there. Small world, eh? 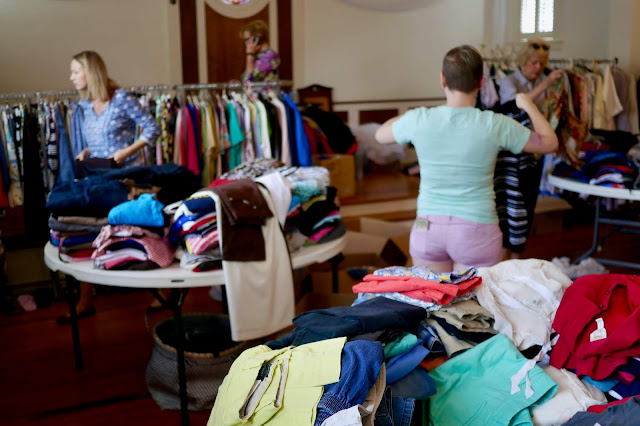 As you can see, the tables are piled high, too high if you ask me, but I've been overruled. Jackie tells me that people line up for several hours before the doors open and it is like Black Friday here. I've got a pretty picture of those stacks tumbling down, but hey, what are you to do when folks have been so generous with their donations? We've got belts, tons of shoes, loads of purses, hats, bathing suits, lingerie, both men's and women's clothing with the vast majority of it being of very good quality. Will more come in tomorrow? I so hope not, but there are no guarantees.

Meanwhile, other volunteers are feverishly working in other parts of the fellowship hall, sorting everything from housewares to electronics to jewelry to linens. Of course there are books and lots of them. I did come across a few vintage pieces, one of which is a gorgeous cream colored wool knit coat dress from Bonwit Teller which begged to have a circle pin on the collar.

Vintage or not, I came home with something I fell in love with Saturday afternoon. 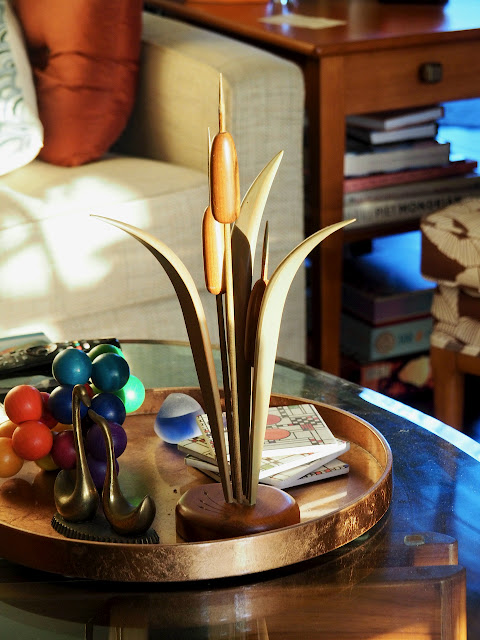 Super fun, right? And of all things, a few days ago I heard from my publisher, Sarah, who asked if I had any donut photos to share with her. No, I did not, that is until someone brought in some fantastic donuts to share yesterday morning. Opening the box I immediately went for my camera. 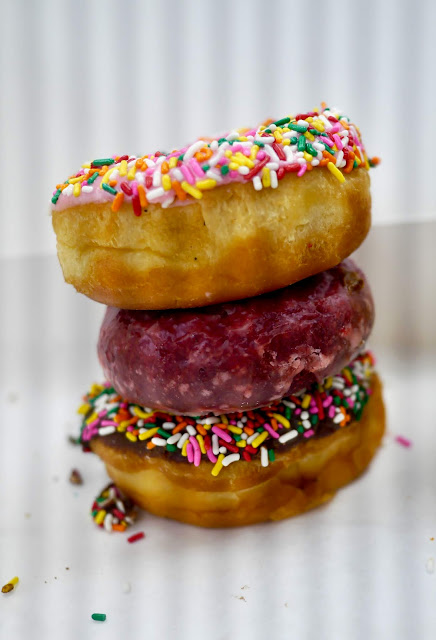 So, four days in and I admit I'm a little worn with four more days to go. Should the donations cease, with a little luck, Cynthia and I can take Thursday off before the big sale. Or, that's my hope anyway. Last evening I had time to visit with friends down by the lake during sunset and the sky looked a little beat up don't you think? Like it was bruised or something. 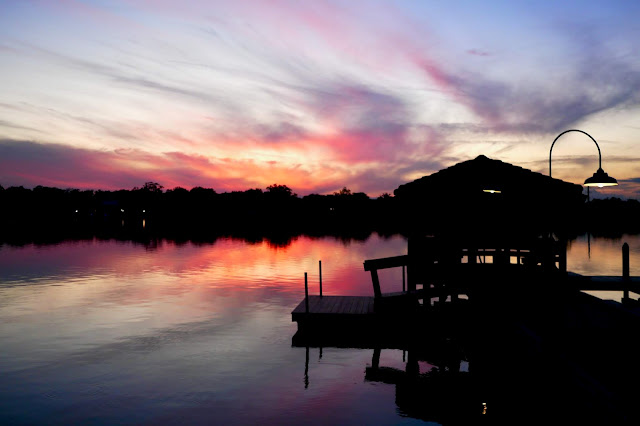 Should you stop by a church rummage sale in the future you will now know what goes into putting such a sale together. Although I've not counted, I imagine there have been at least thirty volunteers involved, not to mention the hard work put in by Ann and Jackie.

Having been warned in advance, I'm happy to do it, but I am here to say that they were not exaggerating when they said it was quite the task for all involved!